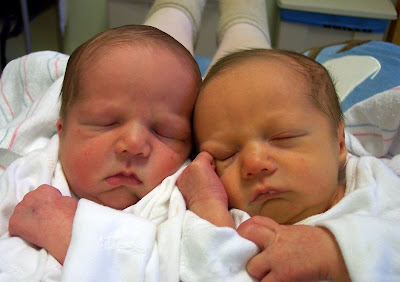 Aaron Robert (6lbs 7oz) and Joshua Benjamin (6lbs 6oz) born July 12 at 12:57 am and 12:55 am, respectively. (Aaron is on the left and Josh is on the right).
I will fill you in on more of the details when I have caught up on more sleep. Right now, we are all home except for Josh, who has 'apnea of prematurity.' Which basically means he has apnea episodes that causes his heart rate to slow down. His case is mild, but he has to remain in the NICU indefinitely until he outgrows this problem. He needs 5 days without an episode to come home. He just had another one today, so the clock resets with day one tomorrow.
I can't wait to catch up with all of you and see where you are all at in your journey. Know that even in my sleep-deprived state, I am thinking of you all.
Brenda
Posted by Brenda at 11:38 PM 20 comments:

I've been trying to finish up stuff at work and get things ready at home....not too successful on either front, but hubby and I will do what we can.

A couple of weeks ago the boys were weighing an estimated 6 lbs each. (Give or take a pound in either direction). I am also carrying a lot of amniotic fluid, so my belly is big, big, big.

Since everything was going so well, I decided to work this week and then take off next week (that would give me 1 week and a day 'till the C-section). I had a non-stress test (where they basically measure the babies' heartbeats and see if when they move the heartbeat goes up and then comes back down to baseline) on Monday. The babies passed with flying colors! Me? Not so much. It turns out I was having mild contractions every 2-4 minutes....uh, what?

I was instructed to see the nurse in the office (my OB is out of town). After checking my blood pressure, which was high for me , I was sent to the Labor and Delivery triage unit. (I'm so tired of that place).

After bloodwork and multiple tests, the docs thought that I may have pre-eclampsia. Oh, joy! I was admitted to the hospital, given an IV and the contractions slowed down.

I had to stay over night and through 'till Tuesday evening so that they could monitor me, my blood pressure and my urine.

Turns out I don't have pre-elampsia....yet. But I'm just below the mark on a lot of tests, so.....it's bedrest for me. I cannot complain, however, 2 weeks of bedrest is a lot less than many people predicted that I would have. However, that means that I have to try to get a crap-load of stuff accomplished via the internet and phone. Laying on one's side and trying to type is a lot harder than it would seem.

I've been trying to keep up with your blogs as well. Perhaps, now that I have more time on my hands, I'll be better about commenting...
Posted by Brenda at 5:50 PM 6 comments: