So last Monday I went to the OB.  I just had an ultrasound and the estimated fetal weights of the boys were about 3.5 pounds each--in the low to mid 90s in terms of percentiles.  BIG babies!  I got the  results of my glucose tolerance test (all fine), my blood pressure (a respectable 118/70) and my protein in the urine test (all fine).  So the doctor announces to me, "Wow. You aren't having any of the problems we look for in women carrying twins.  You were made to carry twins."
I almost fell off of the exam table.  Only 4 months ago 2 of the 4 doctors I spoke with, including one in my OB's practice, was suggesting a fetal reduction.
Not that any of us could have predicted the future.  But wow.
I can only hope that things keep going well, although my stress is decreasing with regard as to whether the babies will survive to "what the heck do I know about raising children."
Also, my perception of pregnancy is changing.  I am shifting from "oh, thank you, thank you I am still pregnant" to "OK, how many weeks until the C-section?"
I have been battling a recurrent bladder infection.  Unfortunately, I don't have all the classical symptoms of a bladder infection (i.e. that burning sensation).  My typical bladder infection involves nausea, frequent urges to pee, generally feeling poorly and being really, really worn out.  Not too unlike being pregnant. So I'm not sure how long I've actually had this bladder infection.  I am thinking for at least 2 or so weeks.  Not that delivering the babies will prevent me from getting a bladder infection, but I think that maybe I will recognize it sooner.  Kindly, a call to the OB's office led to a prescription for an antibiotic without having to go in that night for a urine sample.  I did have to go in later though, as they just MUST have my pee.
In other symptoms (complaints), I am having trouble sleeping, although I am so exhausted.  I also have alarming heartburn. Heartburn to the point that the acidic taste can actually make me throw up.  Thank goodness that Zan.tac was invented.  Otherwise, I would have to just eat chalk all day or something similar.
Well, that's all the complaining that I have on tap for today.  I have some other things that I will hopefully get around to sharing with ya'll when I next post.  Nothing too spectacular; just what's happening in my little world.
Posted by Brenda at 9:08 PM 7 comments:

Bot front view (my DH thinks he looks like the Joker...) 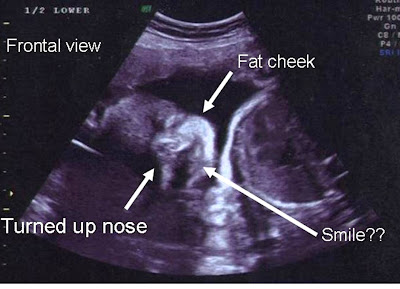 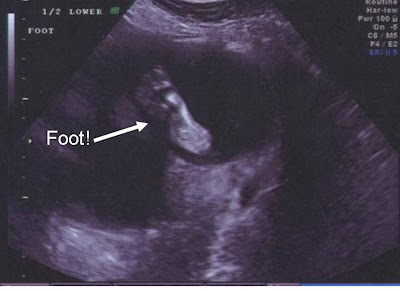 Bit's profile; the u/s tech said it looked like he was sticking his tongue out! 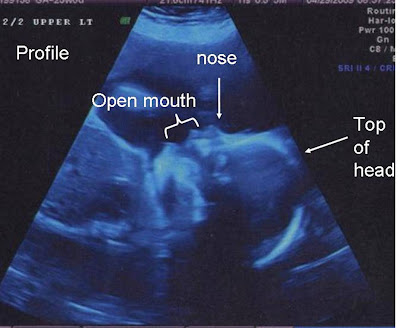 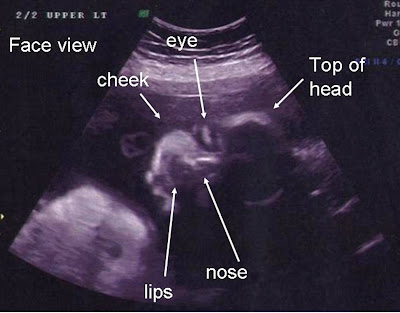 Of course I'm biased, but I think they look rather cute. Although, I didn't think about how cute they were last night when my husband tried to kiss me goodnight and I had abruptly excuse myself to run to the bathroom to relieve myself of my after dinner snack. And my face certainly doesn't look cute today, as the expulsion of my food seemed to prompt a number of blood vessels in my face to explode. Yes, I have had raspberries and spider veins on my face today. Luckily, I have freckles (what nearly 36 year old woman STILL has freckles???) and they can hide a lot of sins. I never thought I would be grateful for freckles.....
Posted by Brenda at 12:09 AM 7 comments:

Actually, we got back right at the end of April, but I have been too tired/lazy to post.
The baby shower was really nice; I didn't freak out or qualify everything I said with "if these babies make it."  Which, you know, would be kind of a bummer to everyone around me.
We purposely didn't register for any blue things on some advice I got from a co-worker.  He said that when people found out he was having a girl, EVERYONE bought him pink things unless they specifically got it off he and his wife's baby registry.  DH and I?  Blue out the wazoo.  And two of everything clothing-wise.
I had a good time, got to see some of my high school friends and some aunts that I haven't seen in a few years.
The rest of the trip, it seemed like DH and I were running around trying to see everyone.  Oh, and it was his Dad's birthday and our 11 year (wow) anniversary.
I got reacquainted with sweet tea (ahhh, I LOVE sweet tea). But found out that I couldn't drink it; it either didn't agree with me, or I drank it too fast and then lost my dinner/lunch/whatever.  I'm sure that was for the best anyway, as caffeine is supposed to be at a minimum.  I just got DH to order some and I would take a few sips from his glass.
In other news, I had an u/s last Wednesday and the boys seem to be doing well.  Both are in the 95% for weight: aprox 2.5 pounds each! [which reminds me, if you don't follow Mermaid's blog, go over there and give her some bloggy love.  Her twins were born just under 28 weeks due to a failure to thrive.  They seem to be holding their own, but I cannot even imagine what a stressful experience this must be for her and her DH.]
News like this makes me even more grateful for how well this pregnancy seems to be going.
I have been having a lot of practice contractions.  In fact, I am at home from work today because I just wanted to monitor how things were going.  I have to call the Dr's office if I get more than 4 contractions an hour.  Last night before I went to bed I was up to 3 an hour.  I drank a HUGE glass of water and went to bed. And then proceeded to get up every hour to pee.  When I got up this morning, I was having contractions again, so I decided to monitor and see if they got more frequent.  They seem to have settled down now.  I think I only had one or two in the past few hours.  I think I miss most of them because they are really so mild.  The ones last night were nothing to be trifled with.  They made me rather nauseous.
So, I'm hoping for the best and trying to take it easy today.  I think all will be OK, but I have a sneaking suspicion that I may have to take off time from work earlier than I want to in order to keep contractions at bay.  That wouldn't be so bad if we won the lottery....
Posted by Brenda at 2:37 PM 4 comments: