Hmmm. Not sure why I have the doldrums this Christmas season. I feel a bit like I did before I had the kids. That vague (and sometimes not so vague) feeling that something is missing. Infertility "stuff" seems to be weighing heavily on me these days. A very close friend of mine at work is undergoing fertility treatments. Ironic, as it was she just a few years ago that I leaned on so heavily during my cycles.

She has undiagnosed infertility. Her eggs look great. Her husband's sperm are of rockstar status. It just never has seemed to happen for her. She and her husband had timed intercourse, the whole bit. But no pregnancies after a year of concerted trying.

She was eligible for IVF, so she and her husband decided to go for it. I think after seeing all that I went through, she was ready to pull out all of the stops. She stimulated well: 10 eggs and 8 fertilized. Excellent quality. She and her husband have been going back and forth as to whether to transfer two or one embryos. Her husband decidedly does not want twins and she felt that twins would be too much to handle without a greater support system (all of her family lives in India). On transfer day, the transfer doc told them they would be transferring 2 embies, "as per the protocol" for someone her age. She questioned the doc about the chances of having twins and got an interesting reply: He asked her if it was going to be harder to have twins or to get a negative pregnancy result. She and her husband talked about it and decided that the possibility of raising twins would be harder. A negative would not be as bad. They transferred one and she eagerly (and nervously) pushed through her 2ww. I saw her ups and downs. Her good days (sometimes hours) and bad days (hours).

Two days before her beta, I saw her at work. Withdrawn, face sunken. I asked if something was wrong. She said that she thought that she had started her period (our clinic tests betas rather late on dpo17 or so). I was sure she hadn't. Maybe implantation bleeding?, I suggested. She called her nurse and had the beta moved up by a day.

The next morning I saw her at work. This time it looked as though she hadn't slept. Her eyes were puffy. Face swollen. Hair pulled back in a ponytail. "Have you gone in for a test", I asked. "Yes" she replied. She was waiting on the results. The nurse called her that afternoon. Negative. She sobbed. I suggested that she go home and try to get some rest, which she did.

What a horrible, horrible thing IF does to us. This woman is a pillar of strength. I admire the hell out of her. Watching her crumble under the pain and anguish of IF is heartbreaking.

Ironically, watching what she has been going through has given me a bit of a new perspective about my job performance over the previous 3 years (when I was undergoing IF treatment). I wonder, if this strong, capable woman wasn't impervious to the pain of IF and have it affect her work, then perhaps it is OK that it affected mine as well.

Now, with the approach of the holidays, she is waiting for her cycle to be reviewed by the clinic. They meet every Wed to discuss the previous cycles. They also have a backlog, so has taken a few weeks for them to get to her. This will be week #3 after her failed cycle. No word yet on what the clinic recommends.

She told me yesterday that she now has a different answer to the transfer doctor's question of whether it would be worse to get a negative results or to face the possibility of twin. "A negative," she said, "a negative is much worse."

I am thinking of all of you that are still cycling and still hoping. I am hoping with you
Posted by Brenda at 1:57 PM 4 comments:

The little update that could...

I didn't have time for a "real" post, so I thought that I would add a couple of pictures of the boys both pre and post haircuts from this past October. 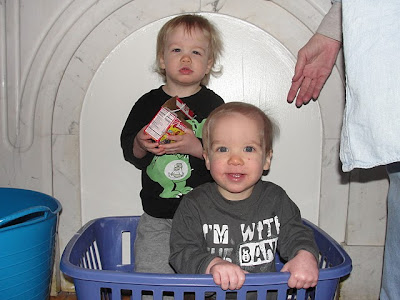 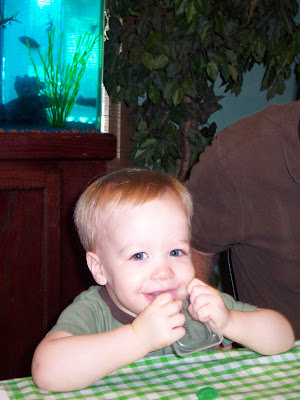 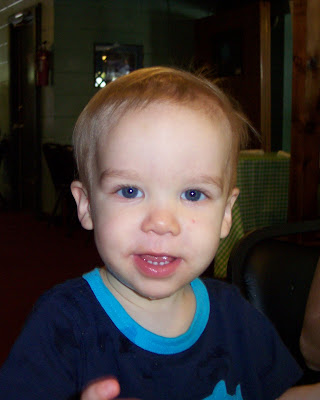 These guys are amazing, I hope that they will always know how much I love them...
Posted by Brenda at 4:10 PM 8 comments:

1. Supportive/funny husbands: I've starting applying for jobs now and last week sent in two applications. However, I got notices that they were going to "go in another direction" this morning. I emailed my husband to tell him the news and he sent me a pep talk to make me feel better. Then he sent me this

which was good for a laugh!

2. The flu shot clinic last night was packed, but the kids, my husband and I are all immunized for this year! My mother in law started to say something, but we were not in the mood, and she kept her mouth zipped!

3. The kids mostly slept until 6am today. (Although J did get up for his middle of the night snuggle fest with mom.

Long over due update

Hi, yes, I'm still here if you are still reading.

I thought I would get back into blogging slowly by just starting a "365 days of grace" post. I've been so terribly grumpy, I need it. So here goes.

1. Cooler weather. Although I hate to see the rain, it is nice to have a break from the warmer temperatures. I can't wait to see the leaves change.

2. Baby oragel. Children waking up at 3:45am that can't go back to sleep, but are soothed by the numbing gel....nice.

3. A. loves books. Every morning when I get up with them and in the eve when I come home, he brings me a book to read him. Granted I am getting really tired of reading the same book over and over. Just yesterday, J. started to bring books to me as well!

4. Flu shot clinics. There is a clinic tonight at the pediatrician's office for parents and kids. Since we plan to go to Fl near the end of Oct, I want to get them their flu shots a few weeks before we get on the plane. I got them their first flu shots last winter, so this year they only need one shot each!

5. Supportive husbands. Although my Mother in law generally gripes when she finds out that the kids are getting shots (she is fairly anti-immunization), my hubby said that he backs me up all the way on this and if MIL grouses when she finds out that we are taking them to get their shots, he will step in if need be :) However, I feel pretty confident that I can handle it. My kids, my decision, end of conversation.
Posted by Brenda at 10:47 AM 2 comments:

Well, didn't I say that I would be posting more? Well, yeah, not so much huh?
Things have been mostly quiet around here. Mother in law is still here watching the kids during the day. The boys are growing like weeds. We worked through sleep training, so they now (mostly) sleep through the night. They eat solids, real adult food. Both boys are crawling and cruising. I am still working and trying to manage things at home. And in about 5 weeks the boys will be 1 year old! ONE. I cannot believe it......
We are in a weird sort of place now emotionally. I am still working at a job that I have had for the last nearly 5 years. This is usually the type of job that you stay at only about 4 or 5 years. I think I am almost finished with my project. I sincerely hope I am, because the work environment has gotten really cruddy lately.
We are considering a kind of scary proposition. Me finishing up my project and applying for jobs. But if nothing comes up soon, I will be a stay-at-home mom in the interim.
Oh the panic that sets in when I write that....not of taking care of the boys. I can do that. But of me not having a job. I have ALWAYS had a job. Since 16. Even through college. I even picked a profession that paid me a stipend in grad school. My husband has always been the wanderer. The free spirit. He has been the one not tied to any one position. I have always been the steadier one financially. We have always moved to where I was going to school, where I got the job. But now his job is going really well. They are talking a nice promotion (and a decent raise). And I don't know if I will ever get a chance to stay at home with the boys once I start into a "real job." (ie, not working in the lab I do now.) And they are already nearly ONE. And, let's face it, although we have 16 frosties on ice....who knows if I can successfully carry another baby? I have already had 3 major uterine surgeries.....
So, we are facing a big decision. And it is not just the 4 of us. It is MIL too. We help support her financially. So it's not just us to worry about financially. Also, I am not sure if I want two women home during the day. Although that can be quite a help with twins, it can be hard having two "moms" making the decisions. However, I don't want her to think we are kicking her out. She has done a bang up job. But there has been conflict, as you can imagine.
Ugh. I am just rambling. Sorry.
We can definitely float for about 4 months or so w/ our current bills if I don't work....
What to do, what to do...
Posted by Brenda at 9:41 PM 2 comments:

I can't believe it has been 7 months since the boys were born. SEVEN MONTHS!

There are so many blog posts that I thought that I would get to sooner. It seems that I have been in a fog. A sleepless, fun, exasperating fog.

I absolutely love my kids. And it has taken me nearly 7 months to say that: MY kids. Not just "the boys." It has taken me 7 months not to want to "correct" people when they say that J has my nose, or A has my hair. I still don't really feel like a parent. At least not what I thought a parent should feel like. Somehow I thought I would be smarter, a better nurturer, or that I would suddenly be endowed with a sense of what I should and shouldn't be doing for these boys.

As it turns out, I'm still just me. Messy, insecure, second-guessing me, except now I have two little ones that make me laugh when I'm in a bad mood and can remind me why "a mother's work is never done."

Good Lord I love these kids, but I may never sleep again. 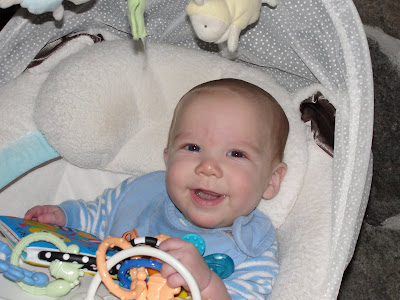 A with his flirty smile 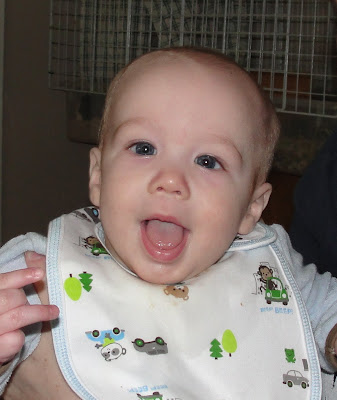 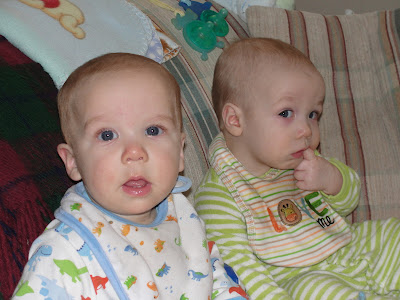